It sounds like a question that shouldn’t be asked.  One feels kind of guilty for even formulating the question.  But time and time again I get the impression that in various ways people do ask the question. Never explicitly, but in subtle ways the question is asked – do teenagers really need their parents?

This question is asked because there is widespread doubt about the place of parents in a teenager’s life.  It is a very faint and dormant doubt, that only springs to life when it’s least convenient, but it is a nagging uncertainty that is always there.

This doubt is made up of two similar, yet distinct beliefs;

The first belief is focused around the notion that a child’s need for parental support and closeness in order to grow and develop diminishes once they get past the age of 12.

The second belief refers to the common feelings that when parents feel like they have something to offer they think their teenager wants little to do with them, or has little respect for their thoughts or opinions.

It’s not hard to understand how such doubts are created.  The typical teenager is quite capable of communicating in multiple ways messages such as I don’t want your help, or I don’t want to be around you. The rebellious moody behaviour often gives parents the feeling they are helpless and unwanted.

There are also the constant references by experts about the teenager’s need to detach from their parents, and explanations about how relationships with peers are the most important in a teenager’s life. No wonder parents can develop doubts.

In my next two posts I am going to briefly look at both of these beliefs and hopefully dispel the misunderstanding that causes people to question the significant role parents have in the lives of their teenagers. In the next post I will look at what teenagers really think about their parents. In the rest of this post I will demonstrate how important parents are in a teenagers development.

When I was training to be a youth worker a common view suggested the task of a teenager achieving independence required relational distance between parents and teenagers. This detachment was portrayed as a process necessitating significant degrees of struggle and conflict within the family unit.  Adolescence was still regarded as a time of “storm and stress” and much of that relational violent weather and tension was experienced within the family.

These days the predominant view is a bit different.

It is true that one of the key tasks of adolescence is to find a sense of self apart from parents, and there is a certain degree of detachment that results. However research over the last couple of decades has shown very clearly that teenagers who have strong supportive relationships with their parents tend to do far better across many areas of life than teenagers who are not supported or have low attachment to their parents.

Listed below are just 5 ways outcomes are improved for teenagers who have close and supportive relationships with their parents.

Close parent teen relationships have been positively associated with improved self-esteem and life-satisfaction in adult life.

There is a direct correlation between the health of parent teen relationships and the age at which teenagers will initiate sexual activity.  The better the relationship the less likely a teen is to engage in sexual activity at an early age.

Positive parent teen relationships have been shown across numerous studies to contribute to lower use or avoidance of alcohol, tobacco and drugs.

A study of more than 12000 teenagers found links between positive parent teen relationships and a decrease in violent behaviours.

Remember statistics are generalisations, and suggest likely outcomes.  Having a supportive loving relationship with parents doesn’t guarantee a teenager will avoid all of the above challenges and trials. In the same way a child who is distant from their parents is not destined to be a victim of the challenges listed above.

What we do know is that the risks are lowered and opportunities for positive outcomes increase when a child has a close and stable relationship with their parents. 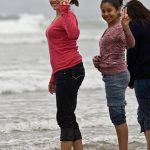 What Teenagers Think of ParentsParenting