What Teenagers Think of Parents

The previous post suggested 5 reasons why the first belief is misguided. This post will explore the assumption by adults that teenagers do no want to be around them or like them.

No matter what I might say here, there will undoubtedly be parents who are convinced their teenager does not want them involved in their life in any meaningful way. Now while this might be true for a minority of parents, for the majority it is very unlikely.

As a teenager the skill to communicate disinterest, disdain, and contempt seems to reach a level of excellence that is rarely attained again at any other point in life. The grunts, the rolled eyes, the scowls, and the pointed passionate comments about various parental failings can definitely take its toll on a parent’s sense of value to their teenager.

The truth is the attitude is often only fleeting, and mostly skin deep. In moments of calm and with settled emotions teenagers are usually far more gracious and grateful about their parents.

Obviously teenagers are less likely to idolise parents the way young children do. They don’t race to the door every time they hear a parent return home like they did when they were toddlers. This is part of growing up. Teenagers are learning to appreciate and value their parents as adults. Part of this is becoming aware of parental imperfections, which can often be troubling and confronting for a young teen. Yet there is also a developing and maturing appreciation for who parents are and a more mature, grown up level of affection.

If you don’t believe, check the research.

Over 75% of adolescents highly value their family relationships

74% of all respondents regarded parents as an important source of information, that figure increased to closer to 80% for 11-14 year olds.

An American study of more than 9000 teenagers carried out over 5 years examined how teenagers viewed their parents:

84% of teenagers thought highly of their Mother

81% of teenagers thought highly of their Father

What About the Rest

Of course some will think “my teen is one of the 20% who really hate their parents.” Firstly these figures are only measures of “high” value responses. Secondly teenagers who really do want their parents in their lives are a much smaller minority than 20%. If parents have been noticeably absent or particularly cruel to a teenager during their childhood it is possible that teens may want a degree of distance between their parents and themsleves. Finally there is a lot parents can do to warrant a significant role in their teenager’s life – it takes concerted and persistent effort. 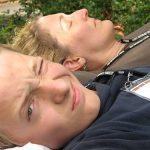