A recent survey of Australian teenagers has found that the current and future generations will have multi-tasking hardwired into how they operate.  It also appears that although teens use technology more, the average population is not that far behind.  Reason to consider carefully just what is the nature of technology fueled generation gap.

The survey was conducted by McCrindle Research to find out about Australians and their entertainment media consumption habits,  particularly those under 18.  It provided yet further confirmation that Australian households are early adopters of new technologies, particularly if they have someone under the age of 18  living there.

One of the real significant findings was just how much content / entertainment teenagers consume in a day.  The only way it is possible the research found was through multitasking, that is doing more than one activity at a time.  Teenagers must be multi-tasking or they couldn’t physically fit it all in.  The most common multi-tasking combinations appear to be using the internet while watching TV or talking / messaging on the phone.

The establishment of multitasking activity from a young age will have an indelible impact on the way these young people learn, relate, relax, and think.  For those who teach or communicate regularly with teenagers these patterns of behaviour and interaction with technology will be increasingly significant – providing both challenges and opportunities.

The other finding of note was the somewhat inconsistent attitudes of adults towards young people’s use of technology.

82% of Australians think that young people today spend too much time using technology.  While teenagers spend on average about 178 minutes/day, the average Australian is not far behind with 145.1 minutes/day.

However despite this concern over amount of time spent,  only 52.4% of Australian families  with under 18s have rules regarding how much time their children spend watching TV or accessing the internet. Of those who do have the rules just 41.3% enforce family rules which limit TV and internet use.

Across all population groups social networking surpassed email as the second most dominant online activity.  The most dominant activity remained internet searching/ surfing.

This is interesting because although the breakdown of time spent on certain activities is different for teens and adults, the trends are similar.  Social networking is increasingly being adopted across all generations, not just teenagers. Hence there are overlaps rather than gaps emerging in generational technological use (see my earlier post).

Where Gen Z’s digital native tendencies do seem to be more distinctive from their Xer or Boomer parents is in the consumption of music and videos online.  Older Australians seem to segment these activities from their online activities much more so than under 18s. 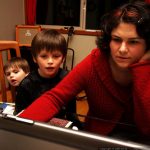