Teenagers are costly creatures. On top of their schooling fees, they’re consistently signing up to another expensive extracurricular activity, impressively eating enough for four, requiring new clothes every other day…. It’s always yet another expense that will see you open your wallet again, and again, and again.  Be it tuckshop orders or public transport tickets, teenagers are arguably one of the deepest holes in the pockets of parents.

As your teen grows, it’s important both for their development and for your own financial security that restrictions are imlemented and money management skills are taught in an effort to ready your adult-to-be for the realities of the real world. After highschool, your offspring won’t be reimbursed with a free meal shall they forget theirs at home and the bus driver won’t waive their ride fee if they step aboard in uniform… the luxuries of teenagdom will evaporate, and it’s time to start preparing them now.

Although their behaviours probably counteract yours at this stage in your lives, eventually it’s likely your teenager will morph into a little replicate of yourself. Your teenager will learn by observing how you deal with money, so it’s important you model responsible attitudes and behaviours now.

Begin by verbalising your messages. Set goals and make them heard throughout your household. Openly discuss your income and then tunnels in which it’s distributed. It’s important your teen understands how your money is made and where it is going.

Talk to your child about the decisions you make. As you shop, for example, check prices and discuss with your child why you’re not purchasing the first item you see.

Teenage Hack: As you’re driving to the shops, have your teenager develop a shopping list on their phone. This will not only keep them preoccupied from their habitual backseat driving, it’ll also ensure the shop is as quick and painless and possible! More seriously, a deliberate shopping list introduces direction, curbing desire to make impulse purchases.

We all want to do as much as we can for our kids, and of course, we don’t want to make them feel like the the outcast they claim we do, however, sometimes their requests are just too extravagant for our modest wages.

Just because yo-yos and marbles are no longer, and your teenager’s best mate happens to own a hoverboard, doesn’t mean you have to take out a second mortgage so your teen can ‘fit in’ at school. It’s important, in a growing age of entitlement, we don’t overindulge our teenagers and play into the “but all my friends have one” attitude.

Remember, your primary job is to prepare your teen for the real world, where they won’t always receive what they want. Ensure your teenager receives a healthy dose of ‘no’s’ to their requests in order to keep their life expectations in check, as well as your household from deficit.

It’s also extremely important you teach your teen to say ‘no’ to those friends who never have money but are always around when money is required. Those friends won’t disappear with their teenage years and their requests become increasingly expensive. Your child shouldn’t feel guilty for denying that type of friend a meal out when they can barely afford their own. Whilst it’s ok to help one another out on the occasion, your teen needs to know that it isn’t acceptable to always shout the same individual, as they’ll only be aiding that person’s own inabilities to manage money.

Thinking of the Future

Be it part-time work or general chores, your teenager should understand that privileges are the result of work. Upon venturing into the real world, it is rare to receive something without being asked for something in return.

Next time your teenager asks for money, consider asking something of them in exchange. Unlike the typical chore system, this process doesn’t necessarily allow your teenager the option to forgo money to get out of work – as they’re seeking the funds first, it’s likely they’re willing to complete the task with a clear and obtainable purpose in mind.

Teenage Hack: If your teenager works part-time, ensure you’re aware of their superannuation fund. Remind them, constantly, the importance of keeping their super in just one, single account as they rotate companies during their career changes. If they sign up to each new employer’s suggested superannuation, they’ll eventually discover a balance of approximately $22 because their percentage of wage has been deposited into almost the equivalent of accounts. They will blame you for not having enlightened them.

If your teenager isn’t very good at this, they’re ‘teenaging’ just right. Priorities don’t consist of saving for groceries, let alone next week’s rent when you’re an average teen. Engaging your adolescent to develop a saving strategy might be a difficult task, but it’s one worth conquering – the earlier they learn to budget, the better your nursing home will be.

Begin by having your teen create a ‘wishlist’ of things they’d like but are unable to afford right now. A lot of teens are able to save with an obtainable end goal in mind.

Teenage Hack: To increase encouragement, consider matching your child’s saving efforts – if they are able to save a certain amount per week/month, match the amount by a particular percentage. The added should boost your teens desire to reach their set savings goal.

Purchase your teen a notebook where they’re able to record their purchases. Recording expenses, they’re provided a visual of their spending habits and are able to determine what patterns need to change. Assist your teen in identifying potential cutbacks and suggest alternatives to typically expensive habits i.e carpooling with mates rather than driving to school individually.

Pull out your teen’s last couple of phone bills and begin thoroughly dissecting them; run through the different charges, browse the graphs, discuss billing periods – ensure that your teen has a thorough understanding of each bill aspect.

Teenage Hack: In academic settings, students are being asked to calculate the details contained within different phone plans. Gone are the days where you’d have to calculate the speeds of trains leaving different stations or how many lollies you can buy from the corner shop. The contemporary world contains smartphones, not steam trains. Your self-sufficiency training might just be doubling as homework, you sneaky multi-tasker you.

Turning the bill dissection process into a competition could be a way to see your teen retain more information. Start calling providers and tell them you’re considering switching, see if you’re able to obtain a better plan than the one you’re currently on and challenge your teenager to locate a better deal than you. Incentivise your offspring further and, if they’re able to locate a better plan, perhaps consider paying their monthly instalments for an agreed period of time. If they’re unable to negotiate to a better deal, they might have to pay a percentage of their phone bill until they do stumble upon a better package in the future (as providers are consistently updating their promotions).

Remember though, your teenager is still a teenager and that means they think they know best. It’s likely that no matter how hard you try, at one stage or another, your teen isn’t going to listen, and they’ll spend all their money on ridiculous or disappointing purchases.  Part of being a teenager is ignoring your parents advice, and part of being a parent is sitting back, allowing your teenager to make their own mistakes and just waiting for the process to repeat all over when they have teens of their own.

Author: This Guest Post brought to you by Bessie Hassan, Money Expert at finder.com.au, and mother of two 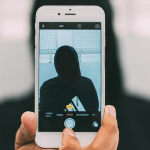 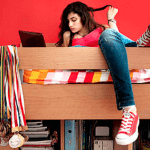 Help Your Teen Organise Their BedroomParenting