The science, or is that art, of describing, predicting and tracking generations has been an obsession of many within our youth obsessed, marketing driven, economy for over half a century.  The Baby Boomers, who established and experienced a genuine generation gap between themselves and their parents, have sought to perpetuate and propagate generational difference ever since.

Such is the popularity and interest in generational science that everyone from managers to ministers, marketers to mothers, and countless more in between, are eager to gain valuable wisdom about the enormous differences between those that were born at point in history not near their own birthday. The desire to satisfy this growing market has resulted in a new generation appearing with each weekend paper or monthly magazine. Where once a generation was considered to be approximately 15 years in duration, these days generations seem to have be cohorts of approximately of 3 weeks!

Despite my implied cynicism I believe there is real benefit in genuinely understanding the distinctives between actual generations.  This week I have been doing some more research on the current batch of teens and their Generation Z characteristics for some upcoming material and courses.  It was while reading through countless articles of spurious conclusions and endless clever names for what the next cohort of kids, that I became acutely aware of how self serving a lot of supposed intergenerational theory is.

Those misgivings aside it has struck me more and more as I think about the upcoming generation that there are some traits that I wanted to put out there and get some feedback on.

One of the key differentiating drivers between generations is the emergence of technologies that radically change communication patterns and expectations.  In recent decades the rate technology emerges has become more rapid, its uptake more ubiquitous and its uses more culturally formative, there has been an increasing overlap between generations in their experience.

An increase in the overlap of experience means less distinctives between generations.  Given that the majority of Gen Z are the kids of Gen X parents, the uptake and experience of technology is likely to be shared. While these kids have grown up with instant messaging and constant connectivity, their parents have learnt to adapt and are just as, if not more, avid users of the technology than the kids. There is increasing data to support a convergence in the way parents and kids use technology.

Combined with changing parenting styles and smaller families, this convergence of technological experience is resulting in less distinctives between the generations, hence less of a generation gap.  A somewhat ironic conclusion for generational experts to come up with.

Like I suggested earlier I am keen to find out from others who are involved with current day teens or tweens  if your experience matches this theory.  Are you finding more commonalities than differences inn the utlisation of technology and media consumption? Would really appreciate your views. 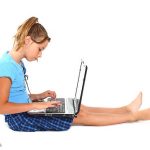